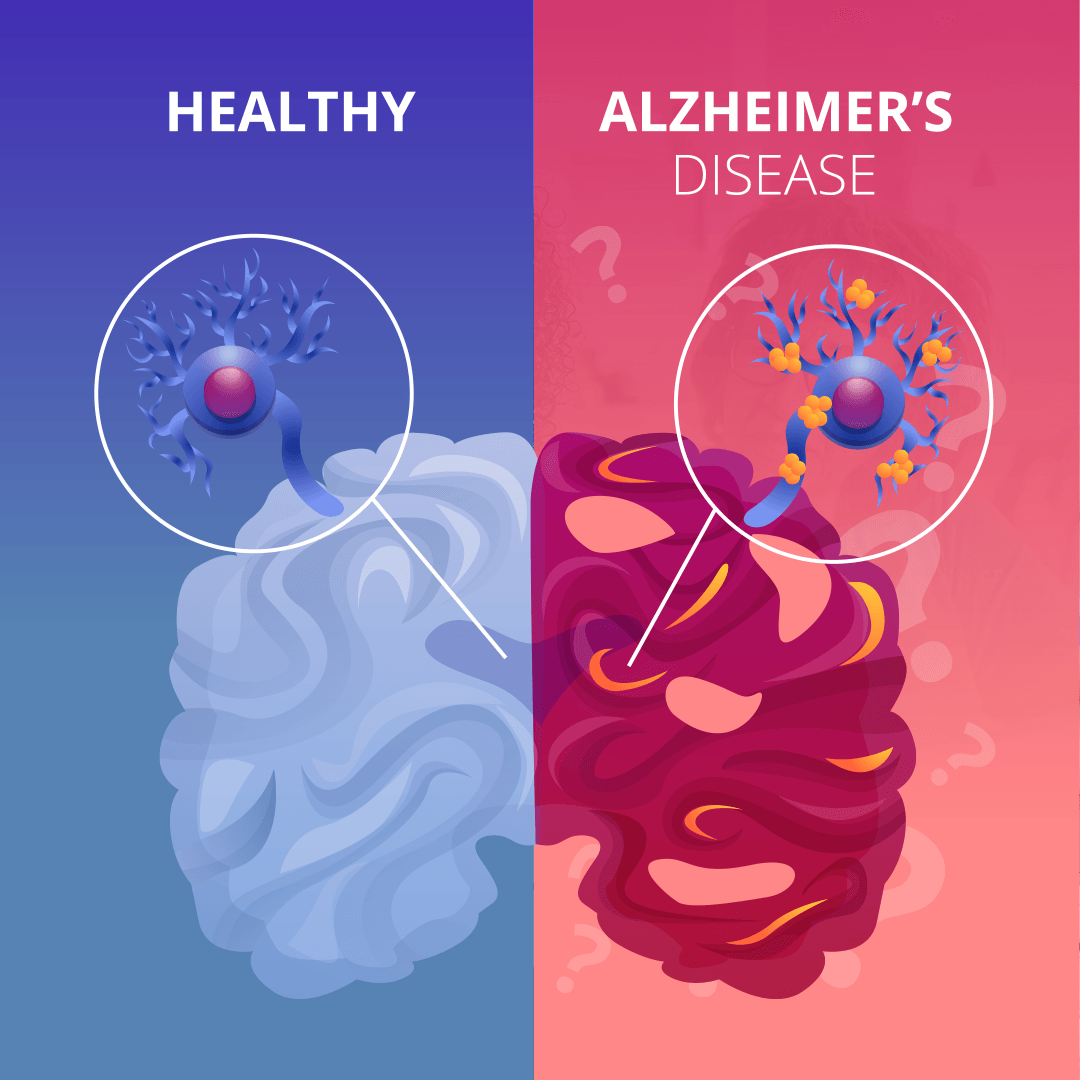 What is Alzheimer's Disease?

The disease is named after Dr. Alois Alzheimer. In 1906, Dr. Alzheimer noticed changes in the brain tissue of a woman who had died of an unusual mental illness. Her symptoms included memory loss, language problems, and unpredictable behavior. After she died, he examined her brain and found many abnormal clumps (now called amyloid plaques) and tangled bundles of fibers (now called neurofibrillary, or tau, tangles).

These plaques and tangles in the brain are still considered some of the main features of Alzheimer’s disease. Another feature is the loss of connections between nerve cells (neurons) in the brain. Neurons transmit messages between different parts of the brain, and from the brain to muscles and organs in the body.

Although treatment can help manage symptoms in some people, currently there is no cure for this devastating disease.

What happens to the brain in Alzheimer's disease?

Scientists continue to unravel the complex brain changes involved in the onset and progression of Alzheimer’s disease. It seems likely that damage to the brain starts a decade or more before memory and other cognitive problems become evident. During this preclinical stage of Alzheimer’s disease, people seem to be symptom-free, but toxic changes are taking place in the brain. Abnormal deposits of proteins form amyloid plaques and tau tangles throughout the brain, and once-healthy neurons stop functioning, lose connections with other neurons, and die.

The damage initially appears to take place in the hippocampus, the part of the brain essential in forming memories. As more neurons die, additional parts of the brain are affected. By the final stage of Alzheimer’s, damage is widespread, and brain tissue has shrunk significantly.

This 4-minute captioned video shows the intricate mechanisms involved in the progression of Alzheimer's disease in the brain.

How many Americans have Alzheimer’s disease?

Estimates vary, but experts suggest that more than 5 million Americans have Alzheimer’s disease. Unless the disease can be effectively treated or prevented, the number of people with it will increase significantly if current population trends continue. That’s because the risk of Alzheimer’s increases with age, and the U.S. population is aging.

How long can a person live with Alzheimer’s disease?

Alzheimer’s is currently ranked as the sixth leading cause of death in the United States, but recent estimates indicate that the disorder may rank third, just behind heart disease and cancer, as a cause of death for older people.

Dementia is the loss of cognitive functioning—thinking, remembering, and reasoning—and behavioral abilities to such an extent that it interferes with a person’s daily life and activities. Dementia ranges in severity from the mildest stage, when it is just beginning to affect a person’s functioning, to the most severe stage, when the person must depend completely on others for basic activities of daily living.

Other conditions that may cause memory loss or dementia include:

Some of these conditions may be treatable and possibly reversible. They can be serious and should be treated by a doctor as soon as possible.

Emotional problems, such as stress, anxiety, or depression, can make a person more forgetful and can be mistaken for dementia. For instance, someone who has recently retired or who is coping with the death of a spouse may feel sad, lonely, worried, or bored. Trying to deal with these life changes leaves some people confused or forgetful. The emotional problems can be eased by supportive friends and family, but if these feelings last for a long time, it is important to get help from a doctor or counselor.