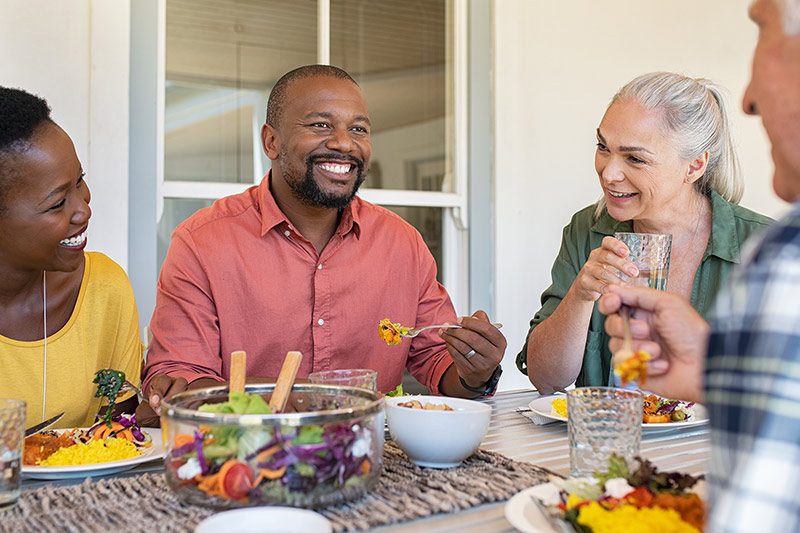 What Do We Know About Diet & Prevention of Alzheimer's Disease?

Can eating a specific food or following a particular diet help prevent or delay dementia caused by Alzheimer’s disease? Many studies suggest that what we eat affects the aging brain’s ability to think and remember. These findings have led to research on general eating patterns and whether they might make a difference.

The Mediterranean diet, the related MIND diet (which includes elements designed to lower blood pressure), and other healthy eating patterns have been associated with cognitive benefits in studies, though the evidence is not as strong as it is for other interventions like physical activity, blood pressure and cognitive training. Currently, researchers are more rigorously testing these diets to see if they can prevent or delay Alzheimer’s disease or age-related cognitive decline.

Changes in the brain can occur years before the first symptoms of Alzheimer's appear. These early brain changes suggest a possible window of opportunity to prevent or delay dementia symptoms. Scientists are looking at many possible ways to do this, including drugs, lifestyle changes and combinations of these interventions. Unlike other risk factors for Alzheimer’s that we can’t change, such as age and genetics, people can control lifestyle choices such as diet, exercise and cognitive training.

How could what we eat affect our brains? It’s possible that eating a certain diet affects biological mechanisms, such as oxidative stress and inflammation, that underlie Alzheimer’s. Or perhaps diet works indirectly by affecting other Alzheimer’s risk factors, such as diabetes, obesity and heart disease. A new avenue of research focuses on the relationship between gut microbes — tiny organisms in the digestive system — and aging-related processes that lead to Alzheimer’s.

The Mediterranean and MIND Diets and Alzheimer’s

One diet that shows some promising evidence is the Mediterranean diet, which emphasizes fruits, vegetables, whole grains, legumes, fish, and other seafood; unsaturated fats such as olive oils; and low amounts of red meat, eggs, and sweets. A variation of this, called MIND (Mediterranean–DASH Intervention for Neurodegenerative Delay) incorporates the DASH (Dietary Approaches to Stop Hypertension) diet, which has been shown to lower high blood pressure, a risk factor for Alzheimer’s disease.

Ingredients of the MIND Diet

*Be careful about how much alcohol you drink. How the body handles alcohol can change with age. Learn more about alcohol and older adults.

A Look at the Evidence

Some, but not all, observational studies — those in which individuals are observed or certain outcomes are measured, without treatment — have shown that the Mediterranean diet is associated with a lower risk for dementia. These studies compared cognitively normal people who ate a Mediterranean diet with those who ate a Western-style diet, which contains more red meat, saturated fats and sugar.

Evidence supporting the MIND diet comes from observational studies of more than 900 dementia-free older adults, which found that closely following the MIND diet was associated with a reduced risk of Alzheimer’s disease and a slower rate of cognitive decline.

Not all studies have shown a link between eating well and a boost in cognition. Overall, the evidence suggests, but does not prove, that following a Mediterranean or similar diet might help reduce the risk for Alzheimer’s dementia or slow cognitive decline. To find out more, scientists supported by NIA and other organizations are conducting clinical trials—considered the gold standard of medical proof—to shed more light on any cause and effect. (See a list of trials currently recruiting participants at the end of this article.)

While scientists aren’t sure yet why the Mediterranean diet might help the brain, its effect on improving cardiovascular health might in turn reduce dementia risk. Two recent studies suggest that, as part of this diet, eating fish may be the strongest factor influencing higher cognitive function and slower cognitive decline. In contrast, the typical Western diet increases cardiovascular disease risk, possibly contributing to faster brain aging.

In addition, the Mediterranean diet might increase specific nutrients that may protect the brain through anti-inflammatory and antioxidant properties. It may also inhibit beta-amyloid deposits, which are found in the brains of people with Alzheimer’s or improve cellular metabolism in ways that protect against the disease.

Studies that observed changes in thinking of people who ate the Mediterranean or MIND diet suggest it might help the brain. For example:

What Do We Know About Individual Foods?

Many foods — blueberries, leafy greens, and curcumin (found in the spice turmeric), to name a few — have been studied for their potential cognitive benefit. These foods were thought to have anti-inflammatory, antioxidant or other properties that might help protect the brain. So far, there is no evidence that eating or avoiding a specific food can prevent Alzheimer’s disease or age-related cognitive decline.

But scientists continue to look for clues. One study, based on older adults’ reports of their eating habits, found that eating a daily serving of leafy green vegetables such as spinach and kale was associated with slower age-related cognitive decline, perhaps due to the neuroprotective effects of certain nutrients. Research has also shown that eating a diet that includes regular fish consumption is associated with higher cognitive function and slower cognitive decline with age. Another recent study, in mice, found that consuming a lot of salt increased levels of the protein tau, found in the brains of people with Alzheimer’s, and caused cognitive impairment.

What About Vitamins and Supplements?

Observational studies and clinical trials have looked at many over-the-counter vitamins and dietary supplements, including vitamins B and E and gingko biloba, to prevent Alzheimer’s disease or cognitive decline. The idea is that these dietary add-ons might attack oxidative damage or inflammation, protect nerve cells, or influence other biological processes involved in Alzheimer’s.

"Despite early findings of possible benefits for brain health, no vitamin or supplement has been proven to work in people. Overall, evidence is weak as many studies were too small or too short to be conclusive."

Take DHA (docosahexaenoic acid) for example. Studies in mice showed that this omega-3 fatty acid, found in salmon and certain other fish, reduced beta-amyloid plaques, a hallmark of Alzheimer’s. However, clinical trials in humans have had mixed results. In a study of 485 older adults with age-related cognitive decline, those who took a DHA supplement daily for 24 weeks showed improved learning and memory, compared to those who took a placebo. Another study of 4,000 older adults — conducted primarily to study eye disease — concluded that taking omega-3 supplements, alone or with other supplements, did not slow cognitive decline.

At this time, no vitamin or supplement is recommended for preventing Alzheimer’s or cognitive decline. Although widely available from drugstores and on the internet, many of these have not been tested for their effects on thinking. Their safety and effectiveness are largely unknown, and they may interact with other medications. (Note: A deficiency in vitamin B12 or folate may cause memory problems that are reversible with proper treatment.)

For more information, visit the National Center for Complementary and Integrative Health and the U.S. Food and Drug Administration.

The Connection Between the Digestive System and the Brain

Researchers are learning how the biochemical processes of food intake and digestion interact with changes in the brain. They are finding that the gut microbiome — the community of viruses, bacteria and other microbes in the digestive system — may influence the onset and progression of Alzheimer’s disease.

Studies in mice and humans show that the composition of the gut microbiome in Alzheimer’s and mild cognitive impairment is different from that in cognitively normal beings.

Changes in the gut microbiome as people age have been linked to disruptions in the immune system, persistent inflammation and chronic diseases, including neurological disorders such as Alzheimer’s. Researchers are exploring how these changes are related to each other and to brain changes related to Alzheimer’s, including neurodegeneration and the accumulation of toxic proteins beta-amyloid and tau.

Identifying the good and bad gut microbes associated with Alzheimer’s could help scientists learn more about the biology of the disease and develop a new way to predict and potentially treat it.

The idea of Alzheimer’s as a metabolic disease that affects the brain, and Alzheimer’s markers such as glucose metabolism, have led scientists in various directions. Besides the Mediterranean diet and its variations, they are looking at other diets as well as individual foods and nutrients.

For example, the ketogenic diet is a high-fat, low-carbohydrate diet that prompts the production of ketones, chemicals that help brain cells work. Studies show that this diet may affect gut bacteria in distinctive ways in people with and without cognitive impairment, and may help brain cells better use energy, improving their overall function.

Researchers are seeking answers to these questions:

These clinical trials are recruiting participants to test dietary interventions:

To learn more or to find a trial near you, visit NIA’s Clinical Trials Finder.

Pages in the for Families section: